Live Stand Up and Improv Comedy Shows Booking in the G.T.A. and Newmarket 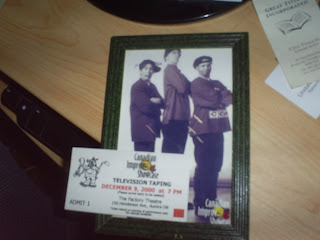 If you're looking for live comedy showsin the G.T.A., of the stand up kind at least, you have to look pretty hard. Sure there are sporadic showings of Yuk Yuks hosting various levels of shows here or there north of the city, but nothing sustained in one spot, and certainly no place that has claimed comedy as its own. TPE productions hopes to end that by offering live stand-up, emcee or improv comedy shows.Stellar Hall may just be that place.


I've noticed a lack of available comedy stages in the north of Toronto spots for a long time like Richmond Hill Markham, Thornhill and Vaughn as well as Stouffville, King, Aurora, Georgina and what have you ...Nothing!, And I don't think its because their isn't a market for it - Canadians attend comedy movies #1 of all genres - just that no one aside from Yuk Yuks has ever seemed to package anything affordably tangible and sustain it. Some improvisation troupes are around, I helped start one and was the original Producer and also for for the TV version of  The Canadian Improv Showcase, but it's not the same. 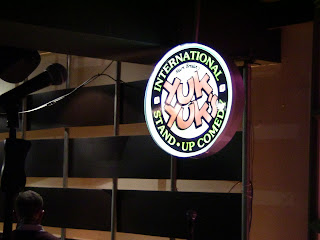 Around that time I was also a regular attendee of the Yuk Yuks stand-up comedy workshops run by the circuit pros and learned a lot from them. Guys like Mike Bullard, Glenn Foster and others taught us the ropes with the idea of it leading up to a performance in the Canada's Funniest New Comic Contest. It was literally my first time on stage doing my stand up routine on stage and didn't win - Jeremy Hotz did - but I did cut my teeth, and gained a respect for those that do it for a living.

Knowing this, I've always kept in the back of my mind the lure of comedy, and the need for a regular spot / stage north of Toronto to be showcasing comedic talent - not only for TPE, but for entertainments sake as I personally enjoy comedy and would like to have something nearby to keep myself entertained. I've done that a lot - created something to entertain myself. Ha. But usually others enjoy it too - like when as a single I got bored with the only 30plus bar worth salt in town and created my own licensed event night, complete with a buffet, live music(duo or trio) followed by a DJ / dance, had old TV movies and shows on the screens and ran games with prizes, like a mock version of the old "Dating Game" live. It was a blast...and so that in itself is the allure of putting on shows of any kind - whether it be a film or a live event - giving others a lift.

Recently I was invited by a Yuk Yukker agent (and former stand up comedian) to check out some of the up and coming performers for Yuk Yuks performers from across Canada, and looks like we have some great talent in the fish pool ready for the big time shows.TPE would likely use Yuk Yuk's for some venues but to create a local scene it will take other types of supportive comedy nights.

I likely will not host though, as I've come across a talented "young" stand-up comedy phenom, Jeff Leeson and a host of sidekick stand-up guys who can take the load while I can float in and out doing cameos or filler when needed.

What I have in mind is a similar set up for an open stage but with at least one feature comedian / host and perhaps, along with a  couple others to open the night and then open up the stage to amateurs.  This format can be tailored and is ideal for corporate gigs.